Rick: I am happy for having been invited again to Writers’ End and to present the English translation of my novel. I will speak about the translation later and how I see the process of transferring sexual situations into literature. Let me start reading first.

Qu: May I speak as the only man here?

Qu: Concerning relationships, for me the novel was not lesbian specific, for me it was about relationships between two people, the fact that they were going over the same emotions as I would with one of my girlfriends.

Rick: Can a relationship be specifically lesbian? I don’t think so. Heterosexuals tend to apply their heterosexual patterns to a lesbian couple. They think one of them must be more like the man in the couple and the other the woman, especially the one that looks more ‘female’. But these roles can switch very often, even in a single day, as they might with heterosexual couples as well. Notions like ‘male’ and ‘female’ don’t fit very well. They have changed radically over centuries past. Historically, ‘female’ meant ‘being more emotional, less intellectual, more driven by instincts and all kinds of desires’ and ‘male’ was defined as ‘more active and brain driven’, but these are only stereotypes and you are right in this regard. In my books I want to show that for desiring someone it is completely irrelevant what sex in the sense of ‘gender’ the other person has. I don’t like these labels, homosexual, heterosexual, bisexual. In reality, people often live their sexuality beyond the influence of the mass media which show completely stereotyped images of how and whom you should desire.

Qu: but this ‘putting people into boxes’ is a marketing strategy to sell books or TV features or films better, isn’t it?

Rick: I don’t think there is one who is more dominant in a lesbian relationship. ‘Dominance’ can have so many aspects. You can be dominant in making the first step towards a sexual moment, like Irene does, who in this book is the one who most of the time just reacts, but in other fields you are the one who just follows. This is the same with heterosexuals. Take a heterosexual couple, all these things like being indecisive, saying ‘yes’ first, then saying ‘no’, meaning ‘perhaps’ – this behavior is normally assigned to the female partner. And it is not particularly a sign of dominating the relationship, on the contrary, it shows the fear of losing control.

Qu: But I always thought that in a lesbian relationship both are equal.

Rick: Are you insinuating that a lesbian taking over the ‘male’ part in the relationship prevents equality?

Qu: Doesn’t dominance depend on the circumstances? You can be dominant because you have more maturity, or are older, or on the contrary, because of your youth. There is lots of things ‘helping’ to be dominant. You just cannot apply gender stereotypes only.

Rick: This is only partly true – concerning the dynamics between two partners. But as soon as a heterosexual couple goes out and meets other people, the male dominance in society is a fact every woman is confronted with. A lesbian relationship doesn’t have this problem.

Qu: What is interesting is that in your book both women work in the same business and the main character, Irene, the first person narrator, is obviously a senior employee in the business, while in the relationship Anita is holding the reins and driving the action. So in my opinion Anita is the dominant one in the sense of having the control of the action, doing strange things so the other has no other means than to react.

Rick: You can call this dominance. But with Anita and Irene dominance constantly shifts from one woman to the other, and this is an example of how dominance can flow and affect the dynamics of a couple. But you always have to consider the place that women have in society. In a lesbian couple, both women have equally inferior positions in society – inferior to the position of men, while in a heterosexual couple, in their power games, a man can always rely on his superiority in society. This aspect does not work in a lesbian couple. This is the only tiny advantage a lesbian couple has.

Qu: Are there female predators in the lesbian circles?

Rick: Yes, it is the strategy of my publisher to attract the attention of the public in a saturated market. Of course, for me it is important to describe the sexual aspects of a relationship, as this is the point which is almost always skipped in other stories, films, books. This is really something that is missing. But for me it is also the field where lots of battles for dominance in a relationship take place, and it shows where the relationship heads to, so why skip it. It shows what people long for, what they are afraid of.

Qu: Maybe it was only my perception but as to the two protagonists in the book, I did not feel that they were in love. Infatuated yes, but not in love. Especially Anita does not really know who she is, but she has so many ideas of what she thinks she is.

Rick: You are right. It is typical for the first steps into a new love relationship that you are infatuated and this makes you blind for what love really is. I wanted to show what passion can make of a person. Irene does not want to see the reality of Anita’s life. Anita has just moved into a new flat with her partner and cannot move out a few months later because of a new love appearing on the horizon, especially when having two small kids.

Irene calls Anita ‘chaotic’ but this being chaotic also comes from the fact that Anita does not fit into any of the expectations of what society has of being a mother. She is no typical mother, she fails in everything the others – her own mother, her ex-husband, the new wife of the husband and so on – want from her. And she does not meet any of the expectations of the two girls she has a lesbian relationship with. So, she is obliged to lie and she is so confused.

Rick: I totally agree with you with respect to Anais Nin and I think she is totally underestimated in comparison to Henry Miller. She was a pioneer of the female writing of her time, but she had to write books to maintain Henry Miller, who had no money, so for me her stories are too much focused on ‘how to please a man and his penis’, to please the male readers of her stories.

Qu: She did not write anything homosexual, did she?

Rick: I didn’t mean to complain that she did not write any homosexual stories. What I wanted to say was that in her stories, women are only seen how men want to see them, they serve as projections. She never speaks about the pleasure of the woman, of female orgasms, female desire, her sexual organs and so on. She is very focused on the pleasure of men. I do not like this at all. It is even boring to me.

Qu: I have a quite unbalanced understanding of the two characters of your novel as you write only from the perspective of Irene, we know all her feelings, but nothing about the feelings of Anita.

Sue Almond: But this is the aesthetics of Karin Rick’s writing, she always writes from the perspective of one of the characters. And I do not agree with you. We know much about Anita because of her actions, reactions, her manipulations etc.

Rick: My writing is about characters who are bewildered by what is just happening to them, and who are too close to all the things that happen to them, so they are overwhelmed by what is going on.  They are constantly on the move  and have to react to unexpected things that come from outside. I love to describe the bewilderment of my main characters. I follow these people very closely, and the flow of writing as well suggests that what will happen next is unknown. The writing follows the main character like a camera in a close-up.

So, if you say that we know nothing of Anita’s ambitions or deep feelings, this is not true, we know a lot through the eyes of Irene’s mad love for her. It is true – the literary perspective is a very partial one, partial to the main character, identifying with her. In my new book, ‘Venuswave’, which is being translated just now, I have chosen to write from two perspectives, which gives more insight into the motivations of the characters.

Qu: Did you change the English title into ‘Twists of Lust and Trust’ because you thought this will attract people more than a title like ‘Chaosgirl’, the title of the German version?

Rick: No, it was my translator, who thought that ‘Twists of Lust and Trust’ would translate very well what was going on in the book and all the different turns that the relationship and the sexual desire take, and my publisher agreed with it.

Qu: I don’t think that as a man I am a natural audience for this kind of book.

Qu: We’ll come to that. I first wanted to ask: this is your first translation into English, so my question is, what is lost in translation, what can you do to prevent this loss?

Rick: In this particular case I read all the drafts of the translation, so I was quite involved in the making of it. Fortunately, I know enough English to check whether in my opinion a metaphor fits or not for what I wanted to say. When I had the feeling that in German I had chosen a more sophisticated picture to describe something than the English translation suggests, I asked Ida to shift this or that expression a bit. With my translator, I could say ‘here you did not get my style’ and Ida was so respectful and changed the things I suggested. Normally authors have no influence at all. For example, my Italian translator skipped all the sexual scenes. She was so conservative.

Qu: How can the sexual act be described best?

Rick: For me, sexual ecstasy is the most difficult thing to put into words. Because it is a moment when time stands still for both people and in literature, it should be the same. The literary process is a continuous act. Ecstasy on the contrary, the moment of the very deep union of two people feels like complete eternity. You may have the illusion that the world stops turning, and in such a moment even the text has to stand still, so to say.

My desire for creating a text equals the desire for such a moment of eternity.

Sue Almond: I think this is a good moment for the end of this reading performance from Karin Rick. Thank you so much, Karin Rick, for having come here to speak to us in Lanzarote. We are glad to have had you here and I hope you enjoyed your being here as well.

For further reading go to:

‚Karin Rick Talk‘, TWISTS OF LUST AND TRUST in:
Lanzarote Life Magazine, May 2017 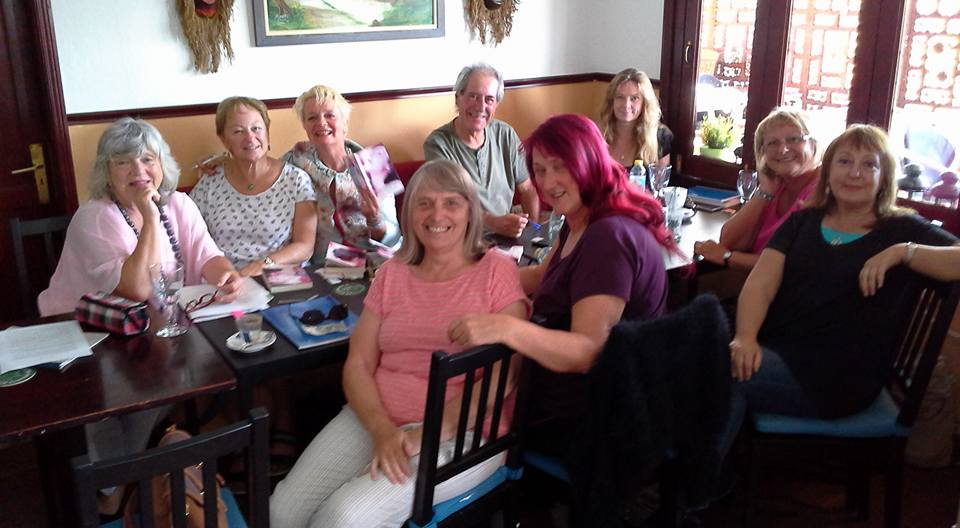 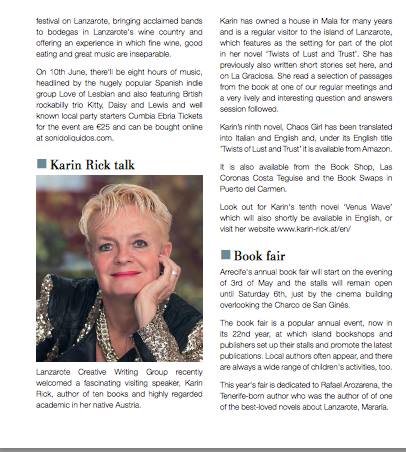