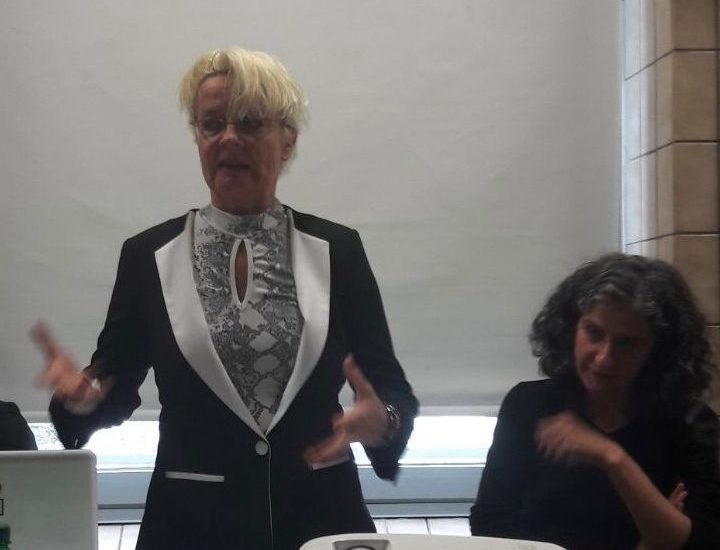 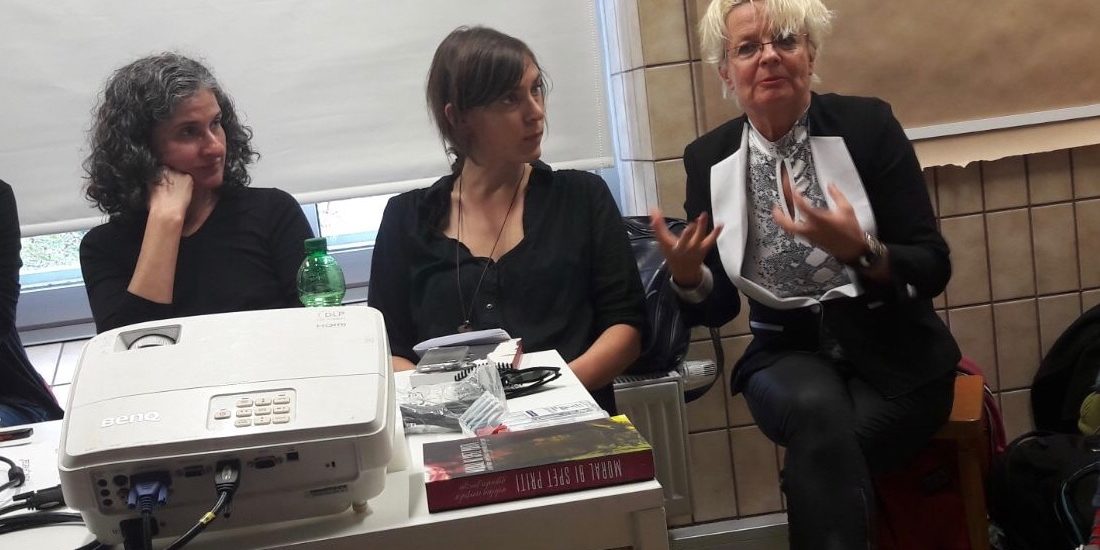 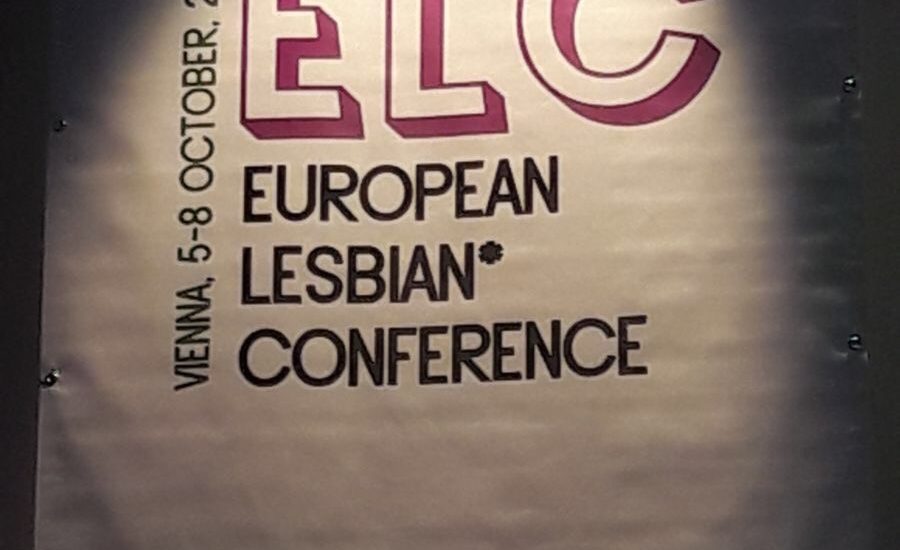 Karin Rick in her introduction lecture for the workshop “Lesbian imagination: production, publication and sharing of lesbian culture”, held during the European Lesbian* Conference, Vienna, 6 to 8 October 2017

I am very happy about having the opportunity to talk to you about some of my lesbian heroines during the EL*C Conference.

All my novels and short stories deal with aspects of lust, attraction and love. They reveal a play with gender identities.

My characters shift stereotypes of all kinds and thus create desire. They have to deal with illusion and reality, delusion and truth. They do not meet the expectations one has of socially compatible women. They transcend role clichés, also lesbian ones, they are meant to fulfill.

I am aware that these women are contradictory, they do not always have the sympathy of the reader. Sometimes they inspire fear or anger or disappointment. Yet my heroines gain room to move – for trying out new strategies and lifestyles.

Common Denominators of my protagonists – Garçonnes and Amazones

In previous essays as in my article, Glamorous Journey I wrote about the images of the Garçonne and the Amazone as role models for strong women in literature, film, media and music entertainment industry. In my literary texts I have created different versions of them in a contemporary context.

In the 1920ies the ‚Garçonne’, also called ‚flapper’ inspired female fantasies to break out of the economic and emotional dependency that heterosexual marriage had established as the only means of existence for women.

The image of the ‚Garçonne’ emerged at a time when women started to engage in professional careers and earned their own money. The ‚Garçonne’ stood for a wide variation of independent, dominant female characters:  the rebel, the cruel woman, the duellant, the ‚femme d’attaque’, the artist, etc. Mostly she appeared as bisexual, very often as a counterculture symbol for lesbian forms of expression. Sexual Science in the 1920ies even attributed her a third gender. The ‚Garçonne’ also invaded the literary discourse of that era. In novels and short stories of the Austrian Writer Fritz von Herzmanovsky-Orlando she appeared f. ex. as androgynous nymph, warrior and Amazone.

This image suits me perfectly well to set on stage the figure of the unruly woman. My books give room to some variations of the amazonian garçonne as rebel and as fighter.

I will now introduce some of my protagonists, the first one being

Anita in the novel „Twists of Lust and Trust“, in German: Chaosgirl
The novel has been translated into English and Italian.
Anita is a boisterous, fast-moving mother of two small boys, who does not to too much pram pushing, preferring to romp around more wildly than her kids and climbs trees with them instead of warning them of possible dangers. She rejects authority, breastfeeds her child while driving her car and shakes the cops on a race through downtown Vienna.
That fascinates her lover Irene, who says:

“Soon we’re in the dense snowy Vienna woods, spinning hairpin turns up towards the hills and beyond, further into the forest. She used to drive up this road everyday on her motorcycle back when she was still married and lived in the country.
Casually, she mentions this. I can imagine how seductive she must have looked. She probably maneuvered the bike without a second thought through the dangerous curves in the same easy manner that she lifts her sons into her arms. She’s a natural when it comes to athletic performance in extreme conditions.”
“I desire her because everything which is not to be taken for granted in a woman of our time seems normal in her. She’s playful. Every day is a game for her. She doesn’t realize how unusual she is, as a mother and as a woman.“

Anita’s life and her appearance are the synthesis of pure motherliness and the boyish attire of a masculine character. Most of her actions are well intended but doomed to fail. In this respect she is even a tragic character.

“She’s man and woman, the ideal fusion of male and female into one person, my voluptuous ideal—this rough-and-tumble daredevil, slim, taunt maleness in a female being.  I love her hands, which are small but calloused.She helped a neighbor build a house, put out fires and tucked her children into bed, all with those hands. I love it when those hands glide in delicate softness over my skin and she pulls me into her slender arms—bold and strong!”

Anita’s unpredictability and unconventional lifestyle induce longing and desire in her lover Irene. But Irene is constantly afraid of losing her because deep down inside Anita is not sure about who she really is and tells stories that are simply untrue. These lies cast a web of doubt leaving Irene to deal with the consequences. Irene’s heart is full of melancholy:

“On the way back, we stop at a pilgrimage church on a hill above Vienna to look down at the city. It’s romantic. I’m happy and sad. It’s devastating to be in love with a woman I so rarely have all to myself. Everything and everyone threatens our time together. The moments that I spend with her are simply too short.With its piers and motorways that run alongside, the Danube appears a cold double bow with a shiny black knot at its center. City lights stretch into the horizon. The church is abandoned in pre-Christmas solitude.”

The second character I would like to introduce is

Kaye, the leather-woman and artist in my novel “Sex is the answer” (in German: „Sex ist die Antwort“). Kaye as well crosses and dissolves borders of identity. Especially in sexual encounters she plays the hustler as well as the vulgar domina or the sexy girl. Kaye shows herself in public as the classic dyke:

”Our steps echo through a badly lit corridor. Kaye is wearing battered, greasy boots. The impact of her heels causes a dull explosion on the uneven cobblestones. She had stuck her hands into the back pockets of her pants as if she didn’t know where else to put them.I don’t like her today. The leather of her pants is even more robust than usual. It squeezes   her crotch tightly, because she has jammed a cock between her labia, which reaches almost up to her navel and challenges the seams of her zip turning her gait into a straddle-legged stagger. Why this macho attitude, I think, blasé.”

In the privacy of an intimate get-together Kaye puts on an act as a sexy vampish woman:

„I am waiting. Red light. Soul music. She enters the room, dressed in a tight leather skirt, leather top, naked shoulders, black tights. Black high heels. Her clothes don’t agree with her body, because she is clearly not a lady but a rascal, a stray with a yellow-red strand swapping across her face.  And now this skirt! A masquerade. Tacky. My smile is inviting. I ask her to dance for me and she does it. Her legs are sliding smoothly in rhyme with the music very closely in front of me. For the first time I see her dressed up as a „femme“. I didn’t even know that she would be able to walk in high heels, to balance in those heels, so that it would look female, now that she is turning around, rotating her ass. Sticky sweet like candy she is in her short skirt whose zip is clutching her crack. She has turned into the girlie she often lets out when she tells her stories. But now less childlike. Tarty.“

My next examples will present you with the Amazone as the unruly woman:

The hippie Pascale, a French drop-out in my love story „Wild love“ (in German: „Wilde Liebe“) lives in the fire mountains of Lanzarote. This is how Pascale is perceived by the narrator when she sees her for the first time in a bar:

„Two women breezed into the Casa Vieja looking similar at first sight. Shabby, disheveled nonchalance. At second sight though striking differences became obvious. The German was a sloppily dressed tramp, nothing more. The French had class. The clothes she was wearing seemed like a second skin, just made for her. Her long hair with its tiny, thick matted curls seemed blown away in one single sway by an invisible gust. She moved her thin but wiry body with elegance gone wild. Angular jaws, hollow cheeks, chiseled lips in a beautiful mediterranean bow like an endless shoreline.When I saw her I thought this woman must have a rich, bursting inner life, unlike me she never has to spend a thought on which posture to take. Her gestures had a natural drive and flowed smoothly along. She radiated the understatement she had adopted for her life once and for all, the rebellious rejection of the haute bourgeoisie she had been born into. However even in her torn and faded jerkin she could not hide the fact that she belonged to a privileged class, because sometimes she raised her head and stuck out her chin just briefly insisting on her individuality, knowing her standing.“

This is exactly what attracts the narrator who will however later in the novel find out that Pascale’s Amazonian look cannot hide the sad fact that she is a broken lonely character whose fighter qualities are getting used up in a struggle for mere survival.

The last character you will meet this morning is

Gini Sedlak in my adventure novel ‚”Furies on Vacation” (in German: Furien in Ferien), set in a lesbian holiday resort on the island of Lesbos. She is the typical amazone warrior. Gini Sedlak is a vagabond, a political activist who constantly fights with state authorities and acts from the margins of society. But the way she dresses is a clear and obvious statement of powerful sexuality.

This is how the narrator meets her on her first evening in Lesbos:

„Livia, she said to me, may I introduce Gini Sedlak, the woman with the switchblade.
Small, buxom, high cheekbones. Eyes like belladonna. The hyper-feminine body always dressed in washed-out gear, which explicitely emphasizes her breasts – they poke out half nude – or her shoulders decorated with epaulettes, her bulging thighs, usually covered with only waferthin cloth..Experienced fighter, veteran of the viennese political scene, she tells anectotes of her rich public life about confrontations with policemen at demonstrations, with drug agencies, the federal police, judges and keepers of law and order – in one word with people whose ideas of correct civic behaviour she does not share.“

Gini Sedlak will play an important role in the investigation of crimes that threaten the carefree holiday feeling on the island. These are just a few examples of the lesbian characters that I have brought to life in my novels and short stories. I hope you have enjoyed meeting them. Thank you for your attention.